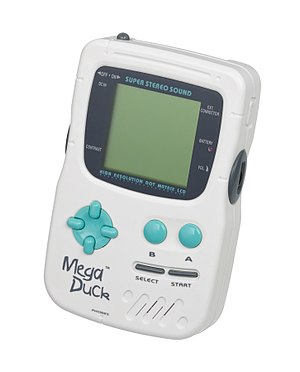 The Mega Duck WG-108 (also known as Cougar Boy) is a handheld game console that was developed and manufactured by Hong Kong-based Welback Holdings through its Timlex International division and released in 1993.

It was marketed under various different brands worldwide including Creatronic and Videojet, and the shell of the console came in white or black plastic. It was sold for about fl 129 in the Netherlands, and for a similar price in France and Germany.
Total:23
Tags: Mega duck
Share
Previous articleNext article