The NES Zapper, also known as The Light Gun[citation needed] or Beam Gun in Japan, is an electronic light gun accessory for the Nintendo Entertainment System (NES) and the Japanese Famicom. It was released in Japan for the Famicom on February 18, 1984, and alongside the launch of the NES in North America in October 1985.

The Zapper allows players to aim at the television set display and "shoot" various objects that appear on the screen such as ducks, clay pigeons, targets, cowboys, and criminals. The Zapper is used on supported NES games, such as Duck Hunt and Wild Gunman. The Zapper could also be used on the title screens of games to move the cursor (by pulling the trigger while not pointing at the screen) or starting the game (by pulling the trigger while pointing at the screen). 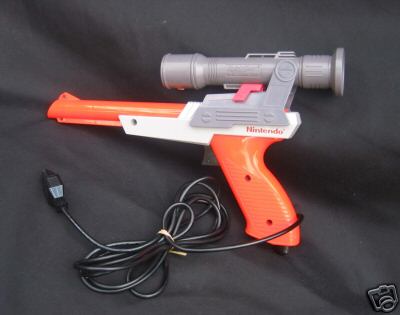 And the most famous game is Duck Hunt, I believe you must have played it!