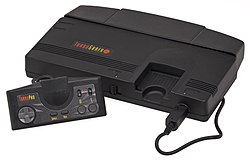 The TurboGrafx-16, known as the PC Engine[a] in Japan and France, is a fourth-generation home video game console designed by Hudson Soft and sold by NEC Home Electronics. It was the first console marketed in the 16-bit era, although in reality it used a modified 8-bit CPU. It was released in Japan in 1987 and in North America in 1989.
The Japanese model was imported and distributed in France in 1989, and the United Kingdom and Spain received a version based on the American model known as simply TurboGrafx. In Japan, the system was launched as a competitor to the Famicom, but the delayed United States release meant that it ended up competing with the Sega Genesis and later the Super Nintendo Entertainment System.
Total:274